From Microtonal Encyclopedia
Jump to navigation Jump to search 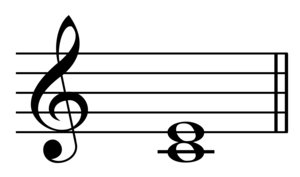 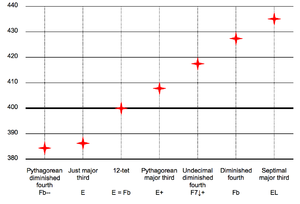 Comparison, in cents, of intervals at or near a major third

In classical music from Western culture, a third is a musical interval encompassing three staff positions (see Interval number for more details), and the major third (

A major third is slightly different in different musical tunings: in just intonation corresponds to a pitch ratio of 5:4 (

A helpful way to recognize a major third is to hum the first two notes of "Kumbaya" or of "When the Saints Go Marching In". A descending major third is heard at the starts of "Goodnight, Ladies" and "Swing Low, Sweet Chariot".[citation needed]

In equal temperament three major thirds in a row are equal to an octave (for example, A♭ to C, C to E, and E to G♯; G♯ and A♭ represent the same note). This is sometimes called the "circle of thirds". In just intonation, however, three 5:4 major thirds are less than an octave. For example, three 5:4 major thirds from C is B♯ (C to E to G♯ to B♯). The difference between this just-tuned B♯ and C, like that between G♯ and A♭, is called a diesis, about 41 cents.

The major third is classed as an imperfect consonance and is considered one of the most consonant intervals after the unison, octave, perfect fifth, and perfect fourth. In the common practice period, thirds were considered interesting and dynamic consonances along with their inverses the sixths, but in medieval times they were considered dissonances unusable in a stable final sonority.

Retrieved from "https://microtonal.miraheze.org/w/index.php?title=Major_third&oldid=8500"
Categories:
Hidden categories:
Cookies help us deliver our services. By using our services, you agree to our use of cookies.