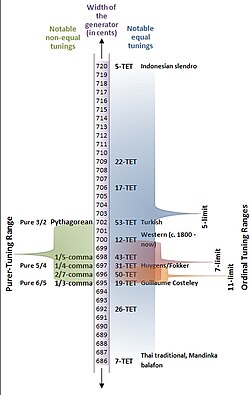 In music, 19 equal temperament, called 19 TET, 19 EDO ("Equal Division of the Octave"), or 19 ET, is the tempered scale derived by dividing the octave into 19 equal steps (equal frequency ratios). Each step represents a frequency ratio of 19√2, or 63.16 cents (

The fact that traditional western music maps unambiguously onto this scale makes it easier to perform such music in this tuning than in many other tunings.

Usual notation, as by Easley Blackwood[3] and Wesley Woolhouse,[2] for 19 equal temperament: intervals are notated similarly to those they approximate and there are only two enharmonic equivalents without double sharps or flats (E♯/F♭ and B♯/C♭).[4]

The comparison between a standard 12 tone classical guitar and a 19 tone guitar design. This is the preliminary data that Arto Juhani Heino used to develop the "Artone 19" guitar design. The measurements are in millimeters.[6]

Division of the octave into 19 equal-width steps arose naturally out of Renaissance music theory. The ratio of four minor thirds to an octave (648:625 or 62.565 cents – the “greater diesis”) was almost exactly a nineteenth of an octave. Interest in such a tuning system goes back to the 16th century, when composer Guillaume Costeley used it in his chanson Seigneur Dieu ta pitié of 1558. Costeley understood and desired the circulating aspect of this tuning.

In 1577, music theorist Francisco de Salinas in effect proposed it. Salinas discussed ​1⁄3 comma meantone, in which the fifth is of size 694.786 cents. The fifth of 19 EDO is 694.737 cents, which is less than a twentieth of a cent narrower: imperceptible and less than tuning error. Salinas suggested tuning nineteen tones to the octave to this tuning, which fails to close by less than a cent, so that his suggestion is effectively 19 EDO.

In the 19th century, mathematician and music theorist Wesley Woolhouse proposed it as a more practical alternative to meantone temperaments he regarded as better, such as 50 EDO.[2]

The composer Joel Mandelbaum wrote his Ph.D. thesis[7] on the properties of the 19 EDO tuning, and advocated for its use. In his thesis, he argued that it is the only viable system with a number of divisions between 12 and 22, and furthermore that the next smallest number of divisions resulting in a significant improvement in approximating just intervals is the 31 tone equal temperament.[8] Mandelbaum and Joseph Yasser have written music with 19 EDO.[9] Easley Blackwood has stated that 19 EDO makes possible "a substantial enrichment of the tonal repertoire".[10]

Here are the sizes of some common intervals and comparison with the ratios arising in the harmonic series; the difference column measures in cents the distance from an exact fit to these ratios. 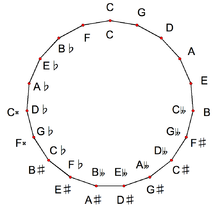 The 19 tone system can be represented with the traditional letter names and system of sharps and flats by treating flats and sharps as distinct notes; in 19 TET only B♯ is enharmonic with C♭, and E♯ with F♭. With this interpretation, the 19 notes in the scale match the table below.

Because 19 is a prime number, repeating any fixed interval in this tuning system cycles through all possible notes; just as one may cycle through 12 EDO on the circle of fifths, since a fifth is 7 semitones, and number 7 does not divide 12 evenly (7 is coprime to 12).

Retrieved from "https://microtonal.miraheze.org/w/index.php?title=19_equal_temperament&oldid=3650"
Categories:
Hidden category:
Cookies help us deliver our services. By using our services, you agree to our use of cookies.